Looking to install Kali Linux? It's not surprising. Kali Linux is widely praised for its capabilities in information security and data forensics. In this article, we'll review some basic facts about the Kali distribution and introduce you to one simple way to install it.

Created by the group Offensive Security in 2013, Kali Linux - based on Debian - is highly popular with information security professionals and so-called ethical hackers. The Kali OS core and more than 600 associated software tools and utilities are fine-tuned for tasks such as penetration testing (simulating cyber-attacks) and data auditing/forensics. Kali fits in the same category as ArchStrike, Backbox and other security-focused Linux distros.

Kali isn't for beginners. Like any Linux OS, you can use it to run your PC, launch a web browser, or type a business document. But the focus of Kali Linux is advanced information security. If that's what you're looking for, keep reading to learn how to put Kali on your PC.

Things to do before installing Kali Linux

Before you begin, back up and save all the important data on the PC where you'll install Kali Linux. Single-boot installs like that described here will wipe the entire hard drive, and while there are options to install Kali using only unused disk space, errors can happen. Better safe than sorry.

You also need to be sure your system will support Kali Linux. The Linux OS doesn’t demand much in terms of resources, but Kali – like all distros – has some minimum requirements (these were effective in early 2021):

The installation steps described here also require a writable CD/DVD drive or USB drive and appropriate media on which to save the downloaded ISO and other files. [Network install options are available but not described here.] You may also need a hypervisor such as Linux KVM, Oracle VirtualBox or Xen to help you create and manage the Virtual Machine (if used), and a utility to create bootable USB media (Etcher, Rufus, usbimager, etc.).

Installing Kali Linux is simple. Depending on your level of knowledge, you can choose from guided and manual installation options. The steps we describe here are high-level and do not address every option. Naturally, complete details are available at the Kali website, Kali.org.

The installation process described here is a single-boot one - meaning you want Kali Linux to be the only OS on your PC. The Kali installation software will give you additional options, including dual-booting to either Linux or another OS such as Windows, but these steps are not listed in this article.

Start by downloading the Kali Linux ISO package from Kali.org. As of early 2021, you can choose from "Kali Linux ISO" for CD/DVD media or "Kali Linux Live" for USB media. Copy the files to CD/DVD or use one of the above-described utilities to image the files to bootable USB.

Next, depending on your chosen media, set your system to boot from either the CD/DVD drive or USB drive, so the Kali ISO and bootloader can be activated in the next step. Voir How to Install Linux for more on changing the boot order, whether by using a special key combination to enter Setup mode or by editing the BIOS file.

Configure and initiate the Kali installation

To configure and initiate the Kali installation, follow the instructions on the Kali website. For now, here's a high-level look at the steps* required to install the downloaded ISO package:

*At various points, you'll be prompted to choose your language, location, keyboard type, time zone, and so on. To keep things simple, we do not list each of these steps in the list.

Depending on your selections in the steps above, you may be instructed to take additional steps at this time. This can include choosing encryption passwords, entering HTTP proxy information, etc.

With the Kali OS core installed, next you'll choose the metapackages to install, including the Linux desktop (by default, it's XFCE, but you can choose others, such as Cinnamon or something else). Metapackages are curated collections of Linux applications - in the case of Kali, this includes the 600+ security tools and utilities that have made the distro is famous.

You'll also be asked whether to install the bootloader within the primary disk partition - doing so will mean the Kali OS you just installed there will automatically load every time you turn on your PC. You'll skip this selection in a dual-boot scenario (so you can choose which OS to load each time).

Finally, reboot your PC. Based on the choices you made above, it should immediately launch Kali Linux - ready to use.

You may now proceed to typical post-installation steps. Examples include checking for the latest OS upgrades, changing default passwords, and perhaps saving a system snapshot for easier backup and recovery if needed later. 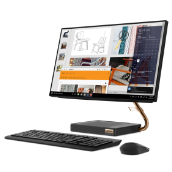 If you’re a small business owner, you can take advantage of additional business benefits and savings by signing up for a free LenovoPRO membership. Or, get a complete picture of the incredible advantages that come with entrusting your business needs to LenovoPRO with our Why LenovoPRO rundown.