After the processor, the next most critical component for successful PC gaming is your laptop GPU, or graphics card. A fast, multi-core processor helps your laptop manage the rapid-fire computations and input/output cycles of multiplayer, streaming games. However, all that processing power is essentially worthless if your system's graphics components can't render the game scenes and imagery equally fast.

There are multiple advantages to investing in a gaming system with a dedicated or discrete graphics card. But what is GPU you may be asking, or what does GPU stand for? It stands for graphics processing unit. But more importantly, what does a GPU do? It manages the visuals while the processor (also called the central processing unit or CPU) focuses on running the game and any other software you might be using at the time. A graphics card also has its own video memory or VRAM, reducing reliance on the regular RAM the processor uses for its work.

It can be difficult for everyday consumers to understand the naming conventions that NVIDIA and AMD GPU offering utilize. Here's a quick, simplified guide:

NVIDIA's primary line of consumer graphics cards has long been the NVIDIA® GeForce® series. Models are identified by four-digit numbers, with higher numbers generally indicating better performance. An example would be the NVIDIA GeForce GTX 1650.

Another, newer NVIDIA consumer brand is the RTX Series, including the NVIDIA® GeForce RTXTM 3060, RTX 3070, RTX 3080, etc. RTX cards include support for ray tracing, which the company says is a better way of simulating real-life light rays as they illuminate a scene.

Lower-end Radeon GPUs get just a two letter/number designation (the AMD RadeonTM R4 GPU, for example), while the most recent Radeon RX series uses four-number IDs (as in AMD Radeon RX 6500 or RX 6700). There's also an integrated graphics option on AMD Ryzen CPUs under the Radeon GraphicsTM series name, and these models are differentiated in the GPU name by their number of graphics cores. 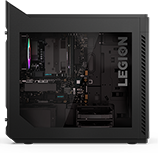